Book Review of “Bringers of the Dawn”

Bringers of the Dawn

Barbara Marciniak spent more than 400 hours channeling information from the Pleiadians, then condensed the information into this intriguing book. In case you’re not up to date on your extraterrestrials, the Pleiadians are an advanced group of “human” beings from the star system Pleiades.  Bringers of the Dawn opens with background information on the Pleiadians, our universe, and especially a history of humankind on planet Earth. This history is fascinating, although it doesn’t match what’s in our history books. I concluded long ago that our history books are fairly inaccurate and very incomplete. 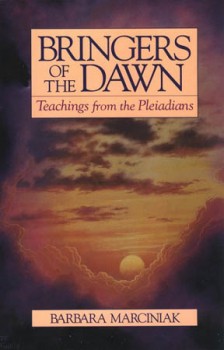 According to the Pleiadian’s version of history, which I found quite plausible, we were once a far more spiritually advanced species, with stronger psychic abilities and a true understanding of and connection with the spiritual realm. We descended from extraterrestrial visitors, not apes. This description also coincides with two psychic readings about my first life on Earth, a life in which people communicated through telepathy, and they were born aware of their relationship to the spiritual realm.

At some point in the Pleiadian version of our history, an alien species (Reptilians), with their own selfish intentions, used genetic engineering to scramble our DNA and limit our psychic abilities, making us much easier to control. I realize that this may sound pretty “outlandish” to some of you, and I still am not sure what to make of it. Anyway, having lost our spiritual connection, we became a brutal and selfish species, starting wars and constantly competing for resources. Apparently, this didn’t bother the Reptilians a bit.

Most of the book focuses on an orchestrated effort, by the spiritual realm, enlightened extraterrestrials, and the many lightworkers on our planet, to bring us into a new age and reorganize our DNA in the process.  The book was written in 1992, but it closely coincides with the information you can find on the2012scenario.com, describing expected changes for 2012.

I keep an eye on the skies and look forward to the day that we can meet the Pleiadians face-to-face, like Billy Meier has. Meier has taken over a thousand photographs of Pleiadian flying saucers, has reportedly ridden in one, and has taken one of the only available photos of a Pleiadian.

This book review was written by Curt Remington