Dogs are Psychic Too

My wife and I both spent over a year in Simply Spirit Center’s clairvoyant training program, and it completely changed our lives. We became very aware that we are eternal spiritual beings having a temporary life here on earth and that we live in a multi-dimensional universe that contains so much more than what most people are aware of. We also find that psychic abilities can be useful in so many smaller ways, like helping us communicate with our dog.

Psychic Communication with Our Dog

The weekend before last, our Miniature Australian Shepherd had been acting strangely all night. While I was talking to my daughter, Riva came into the kitchen, gave me a very serious stare and continued to stare, as if she wanted to discuss something. My daughter turned to me to say, “that’s weird. What does she want?”

I closed my eyes, quieted my thoughts, and psychically asked her. I’ll get back to her response soon, but first I think I should give you some background information.  That evening, my wife Mary and I had volunteered to babysit our two grandchildren while their mother and another of our daughters went to town for sushi. Our granddaughter is only five weeks old, and was quiet and easy. Her brother, is 16 months old and is very curious, looking for one thing after another to get into. One example is when he flipped over the clothes basket on the hardwood floor and tried to climb up and stand on it. Riva watched him intently and stood on the edge of the couch, looking ready to leap onto the basket and try to rescue him. I got up and put our grandson on the ground then turned the basket over before he could take a dive into the hardwood. Throughout the evening, Riva kept a close eye on both grandchildren and stayed alert, instead of her usual evening napping on the floor. At times she’d play fetch or run up and down the hall with our active grandson.

Eventually, our daughters returned from the trip to town, and our grandson’s mom brought him to the guest room to get him ready for bed. That’s when Riva came into the kitchen and stared at me.  When I closed my eyes and communicated with Riva, the message I got was that she wanted to know if all was under control and she could be off duty now. I responded that everything was okay, and she could feel free to relax. She immediately lay down on the floor and proceeded to nap.

The following week we returned from a neighborhood walk and Riva stopped at the end of the driveway, staring at me again. This time it immediately occurred to me to close my eyes and communicate with her. She let me know that she liked the walk, but she’d really like to play freely off-leash in the nearby neighborhood park. I had to get back to work, but I brought her there to play the next day. 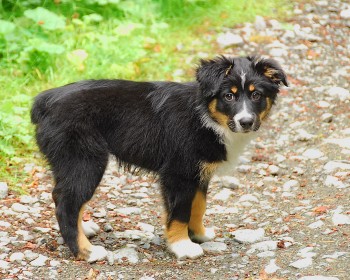 In Letting Gunner Go, I discussed Riva’s early days and mentioned finding her on the internet. When I first saw her picture on the breeder’s website, I had a strong sense that we should have that particular puppy. My wife, Mary, didn’t really want another dog, especially since at that time, we already had a German Shepherd. I asked her to do a psychic reading on getting Riva, like I had already done, rather than making a decision based on logic. We both got the same results, that Riva was quite special and would bring a lot of love and healing into our family. Seven years later, it would be hard to imagine life without her.

Riva will occasionally bark in her sleep, while she’s dreaming. I’ve found that if I’m in a semi-trance state, I can step into her dream and see what she’s dreaming about. I did that when she was a puppy and I found myself standing next to her, at the edge of a forest. A menacing looking wolf stepped out towards us. In the dream, I reached down, put my hand on her back, and reassured her that we were okay. Her barking stopped.

Last week, I stepped into another of her dreams and found us on a grassy hill overlooking a herd of sheep. That struck me as strange, since she has never been around sheep in this lifetime. Maybe she’s herded sheep in a prior life, or maybe it’s in her DNA to be around sheep, at least in the dream state. Whatever the reason, it was a fascinating experience. Since that experience, she has shown up in a number of my dreams.

Psychic Communication with Your Dog 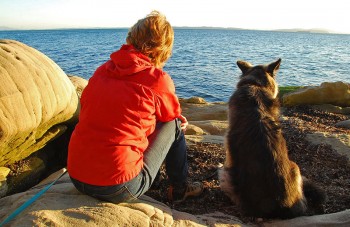 Naturally, the most important key to psychically communicating with your dog is to improve your psychic abilities. We all have some psychic abilities, but it has become clear to me that through certain exercises you can vastly improve them. The best way to do that is to regularly meditate with the exercises Grounding and Running Your Energies.

For those of you that are in a hurry, you might try meditating with your dog lying nearby. Simply hold the intention that you make a psychic connection, then ask (telepathically) whatever it is you want to know. Sit quietly and see if you get a response. A thought might pop into your head. You might see an image, or maybe your dog will get up and give you a response. If you don’t seem to get anything, I encourage you to meditate regularly using the above noted exercises. You’ll gradually increase your energetic vibration and improve your psychic abilities. Two books that could provide more help are my book, Simple Meditation and You Are Psychic by Debra Lynne Katz.